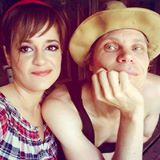 Prolific, influential, cult-­hero & indie -folk icon, PALEFACE, is now a high-energy & charismatic duo featuring his girlfriend Monica “Mo” Samalot, on drum-kit & charming candied vocal harmonies. The band celebrated the release of their latest album, One Big Party (Ramseur Records), with a special guest ­performance alongside The Avett Brothers at Radio City Music Hall, followed by US & Europe tours…including special performances on NPR’s Mountain Stage & Daytrotter (voted top 20 of the year). PALEFACE, was schooled musically by friend Daniel Johnston (The Devil And Daniel Johnston) and soon discovered at an NYC open mic by Danny Fields (The Stooges, The Ramones, MC5). He’s released over a dozen records including two major label releases, and has been called a major influence & inspiration by a wide range of artists including Grammy Award recipient BECK, and The Avett Brothers. He’s also collaborated and appeared on three albums by The Avett Brothers. Additionally, Paleface is visual artist who’s been selling hundreds of his original music inspired paintings at concerts, art shows, festivals and via his website: http://PalefaceOnline.com/

“Paleface is a great songwriter, a generous friend, and a big influence on my early stuff”
BECK

“Paleface is a big influence on many artists from today’s enormously popular “Indie Folk” scene. It wouldn’t be a stretch to call him the Bob Dylan of the increasingly popular styles.” City Beat, Cincinnati

“Paleface is one of the scene’s best-loved products.” Time Out NY

“Paleface is a gem, a brilliant man…one of the greatest songwriters on Earth” The Avett Brothers

“Melodic songs with a sunny vibe while maintaining an edge.” The New Yorker

“This band will liven up any room it’s in, slinging the happiness like a drug”, Roanoke Times