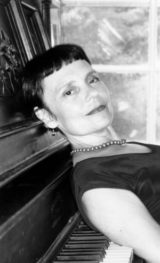 Teri Roiger has been making music all her life (since age 5!) and over the years her music has taken many exciting twists and turns. Teri is a jazz vocalist, but also plays piano, composes music and writes lyrics. She has been sharing her knowledge and inspiration with her many students at SUNY New Paltz for several years. The depth of her experiences and love of jazz is apparent when she brings all of her talents to a live performance, the recording studio, and in her compositions.

In Spring 2011 Teri recorded her third CD DEAR ABBEY: THE MUSIC OF ABBEY LINCOLN, a collection of songs written by Abbey Lincoln, and is anticipating a May 1, 2012 release. The music is heartfelt, exciting, swingin’, nourishing, traditional, yet modern, and John’s arrangements fit the timbre and feeling of Teri’s voice perfectly. Frank Kimbrough is on piano, John Menegon on bass, and Steve Williams on drums (of Shirley Horn fame)! Brian Bacchus is producing this CD and John Menegon did the arrangements.

Teri’s acclaimed composition STILL LIFE is the title track of her second recording. This composition won third prize in the jazz category in the prestigious, world-renowned International Songwriting Competition, a competition recognized by the New York Times as one of the best in the world. The musicians on this CD include Frank Kimbrough on piano, Gil Goldstein on accordion, John Menegon on bass, and Matt Wilson on drums.

In 2011 Teri, along with her husband John Menegon, composed and scored the music for the documentary film BEYOND ICONIC about the renowned photographer Dennis Stock. Directed by Hanna Sawka, this film was premiered this fall at the prestigious Hot Springs Documentary Film Festival, Denver Film Festival, and also in New York City at the doc film festival. It was one of the top ten finalists at the Sao Paulo Film Festival.

Teri has been an integral member of the SUNY New Paltz Jazz Program (New Paltz, NY) for over ten years. She teaches Jazz Voice, the History of Jazz, and Vocal Jazz Ensembles.

Roiger has been active on the jazz scene for many years, performing all over the U.S., Canada, Mexico, and Europe. In January of 2012 Teri and John both performed and taught at the 8th Annual Panama Jazz Festival in Panama City. In the summer of 2011, Teri and John created an ongoing jazz festival in Woodstock called JAZZSTOCK, bringing great jazz artists to the Hudson Valley. www.jazzstock.com